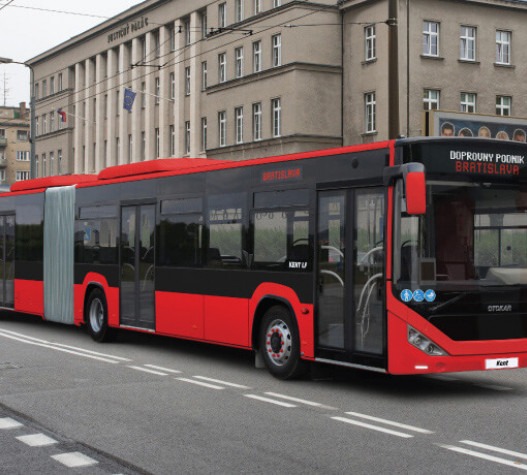 Otokar, a Koç Group company, continues to expand its export markets with its own designed and produced buses. With its public transportation buses currently used in more than 50 countries, Otokar most recently received an order from Bratislava Transport Company (Dopravny Podnik Bratislava - DPB) for 40 Kent Articulated buses. The company plans to deliver the buses that will be produced according to the public transportation requirements of Bratislava, the capital of Slovakia, by the end of 2021.

With 58 years of experience in the public transportation sector, engineering capabilities, and its own designed products, Otokar continues to be a favorite of many capital cities in Europe, offering comfortable and safe travel for millions of passengers with more than 35 thousand buses currently used in 50 countries, including Turkey. Serdar Görgüç, General Manager at Otokar, said, “This order marks another milestone toward our goal of expansion in Central and Eastern Europe as we add Slovakia to our bus export markets. Currently, our public transportation buses are used widely in Turkey as well as several European countries, including France, Italy, Spain, Germany, Malta, Romania, Poland, Lithuania, Serbia, and Bulgaria. We take great pride in serving many cities across the world with buses designed and produced in Turkey.”

Hakan Bubik, Director, International Sales and Marketing - Commercial Vehicles at Otokar, noted that the Kent Articulated buses will be produced according to the public transportation requirements of Bratislava and emphasized that the vehicles, with their spacious interiors, will deliver superior comfort in the city’s transit services, “The buses that will be made to order according to the requests of DBP (Bratislava Transport Company) will feature several innovations, which will be offered for the first time in Europe, to ensure that the passengers enjoy the ride and to improve driving comfort for the users.”

Kent Articulated buses stand apart with their modern interior and exterior looks, ecofriendly engines, and excellent handling. The Kent Articulated buses that will be made to order for Bratislava will come with lower operating costs per seat and provide a pleasant journey each season with a powerful air conditioning system. With features that include ABS, ASR, disc brakes, and anti-jamming door systems for maximum safety, the bus promises ultimate comfort in public transportation. Kent Articulated also makes a difference with its high passenger capacity.

Kent Articulated buses will be produced with many new features as requested by DBP. In addition to automatic passenger counters, the buses will also feature USB charging ports and Wi-Fi connection. A modern information system, supported with high-resolution cameras, will ensure the safety of all passengers, including the visually impaired. With this information system, the passengers will be able to view the current news stories and also track the bus lines and the vehicle’s movement on the map in real time. Featuring wide doors, a low-floor entrance, and an accessibility ramp to allow people with disabilities, children, and the elderly to get on and off the bus easily, Kent Articulated will bring a breath of fresh air to public transportation in Bratislava