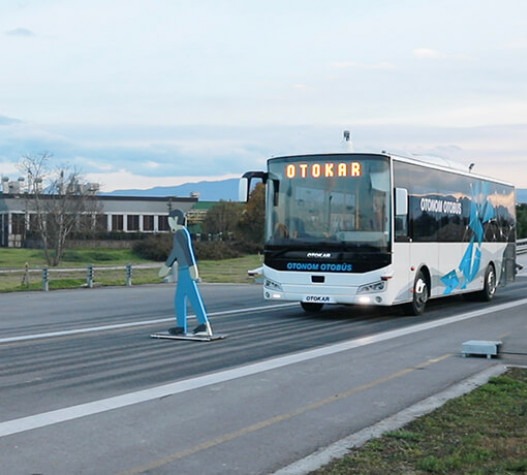 Otokar continues to shape the future of public transportation with research and development activities focused on alternative fueled-vehicles, intelligent buses and autonomous driving. The collaborative project that Otokar carries out in partnership with Okan University for the autonomous bus of Turkey marked an important milestone. With the development work ongoing for three years, the second phase of the software integration and driverless verification tests of Turkey’s first autonomous bus is completed.

Otokar, a Koç Group company, marked a new milestone in the development of Turkey’s first intelligent Autonomous Bus. As a company that has allocated 8% of its revenues for R&D activities in the last decade, Otokar took its work on smart mobility, alternative fueled-vehicles, intelligent technologies and autonomous driving to the next level with the autonomous bus.

The company started working on Turkey’s first intelligent Autonomous Bus in 2016 with the CoMoSeF (Co-Operative Mobility Services of the Future) project, which involved the development of software and hardware for vehicle to vehicle and vehicle to device communication, and then Otokar has accelerated efforts for the development of the autonomous bus. As part of the University-Industry Collaboration Support Program, Otokar has partnered with Okan University since 2018 to develop Turkey’s autonomous bus within the scope of “Advanced Autonomous Bus System Development” project. With the development work ongoing for three years, the second phase of the software integration and verification tests of Turkey’s first autonomous bus, which senses its surroundings and ensures a safe and comfortable drive with precise control at low speed, is completed.

“HEADING TOWARD OUR GOALS WITH DETERMINATION”
Serdar Görgüç, General Manager, Otokar, noted that the company is committed to its vision of developing its own technologies and maintaining the local and domestic attributes of its products, “At Otokar, we are fast on track toward our mission of becoming a global brand by keeping our focus on sustainability and innovation. As a company with strong R&D capabilities, we introduced a number of novelties such as Turkey’s first hybrid bus and first electric bus in the last decade. We also introduced the Intelligent Bus equipped with IoT (Internet of Things) capabilities four years ago. Following the project that involved connectivity between roadside devices and traffic signalization systems, we began to work with Okan University on Turkey’s first autonomous bus. We are fully committed to and heading toward our goal of developing and commercializing an autonomous vehicle which can drive on all roads open to traffic and in all weather conditions.”

“A BUS THAT WILL RE-CONFIRM TURKEY’S R&D STRENGTH”
Görgüç pointed to the importance of this project for the Turkish automotive industry, “In terms of demonstrating that new technologies and efficient mobility methods that will shape the future of cities and the transportation industry can be developed by the the human resource of our country, autonomous bus marks an important milestone. The autonomous bus, developed with the joint efforts of our R&D engineers and the professors, researchers, PhD, Master’s and undergraduate students at Okan University will re-confirm Turkey’s innovation strength and qualified human resource. Our autonomous bus will create a platform for the autonomous city bus that Otokar will develop with a zero-accident rate, which is also in line with the European Union’s 2050 targets.”

PEDESTRIANS FIRST FOR THE BUS THAT PROMISES A NEW FUTURE IN MOBILITY
Otokar has structured the research and development work for Turkey's first autonomous in four phases. With the second phase, which was now completed, the self-driving Otokar Autonomous Bus can detect its surroundings using advanced sensor fusion algorithms on roads closed to traffic. With a sensitive controller design, the vehicle delivers a comfortable ride at low speed between 0-30 kph, at which controlling the driver systems can be difficult. The high-precision, position controlled steering algorithm enables the autonomous bus to turn the corners and to cross the intersections safely. The autonomous bus detects the passengers waiting at the bus stop to pick them up. The passengers, who want to get off the bus, only need to press the stop button.

The autonomous bus, which was designed to always prioritize the pedestrians, gives way to pedestrians at zebra crossings and ensures safety with an emergency brake feature. In the event that pedestrians, animals or cyclists unexpectedly appear in front of the vehicle, the bus applies the emergency brake. Once the obstacle or potential risk is cleared, the vehicle itself makes the decision to continue on the road with the help of advanced sensor fusion algorithms and artificial intelligence, and also detects traffic lights and roadside signs automatically.

The autonomous bus, equipped with a stop-and-go adaptive cruise control system (Stop & Go ACC) that makes driving easier in slow and busy traffic, monitors the distance between the vehicles in front and on the sides, enabling autonomous cruising. The vehicle can use the stop-and-go adaptive cruise control system both at low and high speeds at a safe distance. The third phase of the development is currently ongoing.

For this project, Otokar is collaborating with Okan University, a leading Turkish university with specific infrastructure and knowhow in connected autonomous vehicles. Okan University established the Transportation Technologies and Intelligent Automotive Systems Application and Research Center in 2009.